From Classical to Rock 2019

From Classical To Rock” where platinum selling rock stars and world- famous classical musicians performing together under one roof. Tickets can be found here: www.pvpef.org

“From Classical To Rock” has once again joined forces with the non-profit Peninsula Education Foundation (PEF) to present an intimate star-studded concert benefiting local schools. Set to take place on May 11, 2019 at the Terranea Resort in Palos Verdes. Bringing aspiring High school musicians from local high schools, together with rock stars and acclaimed classical musicians, performing together under one roof.

From Classical to Rock is a of a one-of-a-kind concert, auction, and epic party. Black-tie optional, Cocktails, dinner, along with wine, silent and live auctions. Musicians involved with the event contribute their time, energy and talents to support programming funded by PEF, including music, art, physical education, library, STEM programs and much more! Private donations are still critical in maintaining music education in public schools across the country. The Palos Verdes Peninsula public schools in particular, with the PVPUSD schools receive less funding per student than nearly all other districts in Los Angeles County.

“From Classical To Rock” was founded in 2016 by the famous Chinese violinist Yutong, rock musician Marten Andersson and acclaimed cellist Stan Sharp to help benefit education. Stan, Marten and Yutong produced the first concert together with bassist Robert DeLeo from the band STONE TEMPLE PILOTS and the late Chester Benningtonfrom LINKIN PARK. The concert was a huge hit (it was also the last concert Chester performed with STONE TEMPLE PILOTS). The concert raised $50,000 for the PEF.

“From Classical To Rock” co-founder/co-producer Yutong states: “We are once again so honored and proud to be back working with the amazing organization PEF to deliver the next level of ‘From Classical To Rock’ concert together with the amazing music students from the PVPUSD high schools. All while benefiting the Peninsula Education Foundation. This is a concert you don’t want to miss.”

After last year’s incredible success, “From Classical to Rock” has joined forces with the non-profit OC Music & Dance School to present a star-studded concert benefiting music education for Orange County communities. Hosted by Randy Jackson and headlined by John Rzeznik of the Goo Goo Dolls, special guest Nancy Wilson (Heart) alongside “From Classical to Rock Youth Orchestra and Choir”, bringing young aspiring OCMD music students together with platinum selling rock stars and acclaimed classical musicians, performing together under one roof. 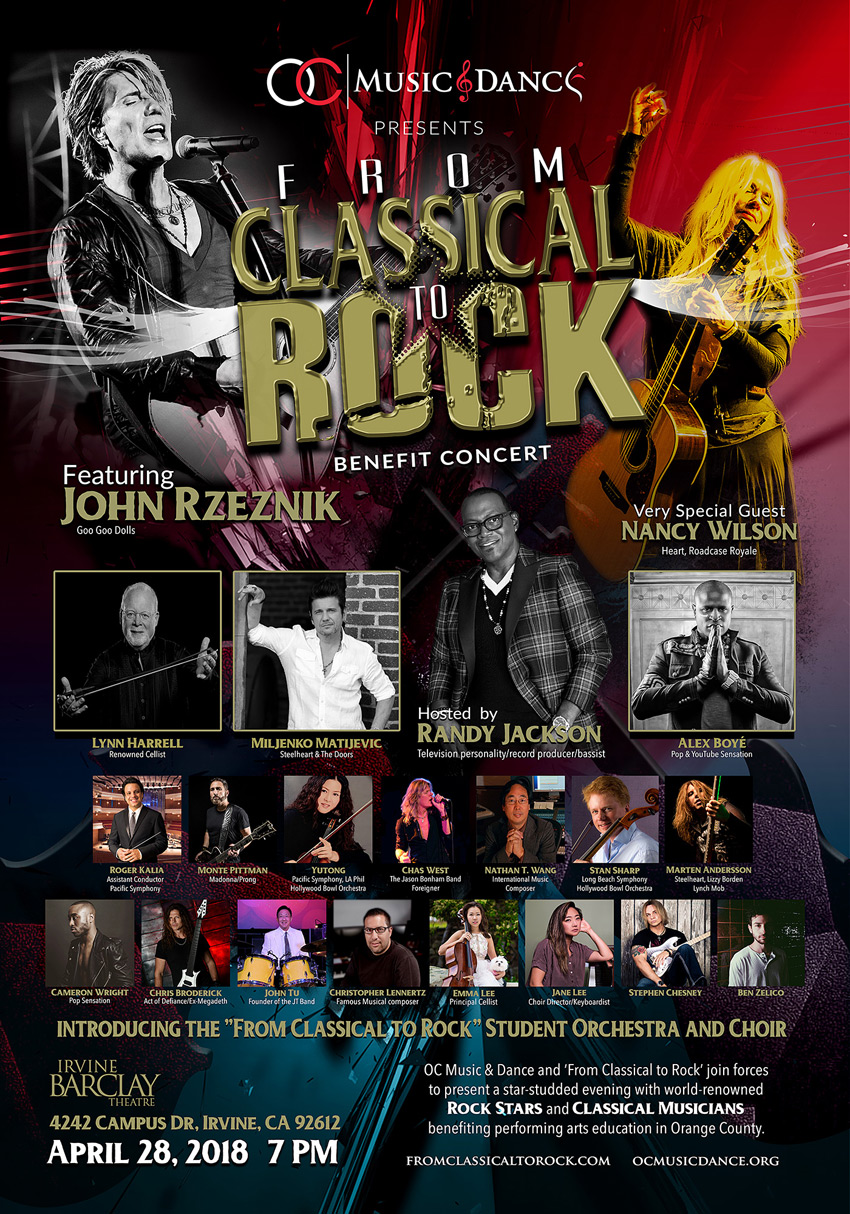 This unique concert features high profile musicians from classical music, jazz to rock and roll with original music scored by one of the biggest Hollywood composers Mr. Nathan Wang, joined on stage by rock, classical musicians and members of the Pacific Symphony Youth Orchestra, members of the Donald Bren Honors High School Orchestra and Chorus, and the honorees of the Orange County Artist of the Year in music, voice and dance.

From Classical to Rock co-founder/co-producer Marten Andersson: “I am so honored and proud to co-produce yet another, even greater “From Classical to Rock” concert, benefiting music education. This time we joined forces with a nonprofit called, Orange County Music & Dance School. It’s an amazing (nonprofit) school who gives talented low income, minorities a change to be the next classical genius or the next rock star. All musicians involved with the event are contributing their time, energy and musical talents in an effort to benefit performing arts in Orange County.

About From Classical to Rock: From Classical to Rock was founded in 2016 by the famous Chinese violinist Yutong, Rock musician Marten Andersson and acclaimed cellist Stan Sharp to help benefit music education. Stan, Marten and Yutong co-produced the first concert with bassist Robert DeLeo from the band Stone Temple Pilots and the late Chester Bennington from Linkin Park. The concert was a huge hit (it was also the last concert Chester performed with Stone Temple Pilots). The concert raised $50,000 for public music education.

For more information From Classical to Rock: www.fromclassicaltorock.com

About The Orange County School of Music and Dance:  OC Music & Dance is Orange County’s first and only nonprofit community performing arts school funded by Pick Up Stix founder Charlie Zhang. OCMD are dedicated to providing the highest quality education and resources for our students, regardless of their ability to pay. Our programs feature private and group lessons across a broad spectrum of art forms, as well as curricula for self-improvement, personal growth and professional development. OCMD mission is to nurture, inspire and empower Orange County’s most committed and talented youth to achieve their dreams and provide a path for them to follow their passions.